A workaholic juggling duties between her family farm, the Dandelion, and Monstrum work. Her siblings rely on and admire her.

Yufa Gamberg is a playable character in Ys IX: Monstrum Nox. She is an energetic girl who is assigned to work as a waitress at the bar Dandelion by Carla after Adol helps the Pendleton company out with solving the case of theft.

She is the first main character that Adol can interact with as a civilian alongside other civilians while he is reading the wanted poster of Adol after being summoned to his first Grimwald Nox and meeting all Monstrums.

Her secret identity is revealed in Chapter 5 as the monstrum Raging Bull (猛牛?) , who specializes in pure "power" and wields a large war hammer that she swings with vigor in battle. Unlike the criminals White Cat and Hawk, she follows the law and has good sense, acting as a mediator whenever there is an argument among monstrums. She blows her cover when she transforms to save her sibling and Felix from the rampaging bull.

Later in the game, it was revealed that she, along with all other Monstrums are homunculus created by Zola to fight the Grimwald Nox with Aprilis. They were originally planned to be raised and trained by Aprilis and Zola. But when Zola disappeared, Aprilis found the job too difficult to be done by herself. So she faked their identities and pretended they were war orphans to be adopted. When they became old enough to join the fight in Grimwald Nox, she sought them out and activated their power by shooting an alchemy bullet at them and turning them into Monstrums.

In the ending scene, she is shown to be married to her boyfriend, Felix. 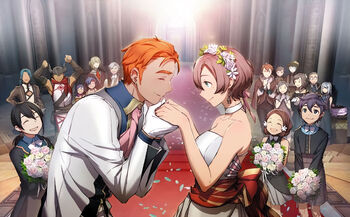 Yufa, married to her beloved Felix at the end of Ys IX

Community content is available under CC-BY-SA unless otherwise noted.