Ys Online - The Call of Solum (イースオンライン?) is an MMORPG spinoff of the Ys series developed by the Korean company CJ Internet. The game takes place several centuries after Adol's adventures with much of the focus still within the borders of the Romun Empire. The game features three different races loosely based off the main Ys series. Each race has a distinct set of classes it can pick up, leading to an even larger variety of skills.

It was distributed by various other companies in five different regions: Korea, China, Taiwan, Japan and Europe, with each server being IP-locked to the respective region.[1] On December 14, 2010, the Japanese server received a major expansion update which changed the game's title to Ys Online ~Ancient Shima's Heartbeat~ (Ys Online～古代シーマの鼓動～?).[4][3]

All but the European version have left beta-testing phases. The European server was the first one to shut down due to bad management within its publishing company, Key2Play (which went defunct and took the game with it), and due to a continuous decrease in the population of the game. The other versions of the game (Chinese, Taiwanese, Japanese and Korean) were more successful and well-managed, but over the years they eventually were also shut down.

The last online server to shutdown was the Taiwanese server on October 1st, 2012.

There are three races in Ys Online and each character has to pick a primary class between Fighter or Mage. Once the primary class has leveled to 20, the player can then pick a secondary class that may be unique to their race.

Eresian - Can become Knights, Rogues, and Warriors as Fighters. The Mage counterpart can become Clerics or Wizards.

Afrocan - Can become Guardians, Nighthawks, Myrmidons as Fighters. The Mages can become Wiccas or Witchdoctors.

Kimoan - Can become Protectors or Archers as Fighters. The Mages can become Conjurors or Shamans. 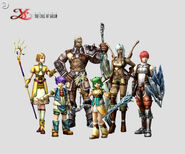