Ys Wiki
Register
Don't have an account?
Sign In
Advertisement
in: Non-canon, Games, Ys: IV Mask of the Sun: A New Theory

Ys IV: Mask of the Sun -A New Theory-

Ys IV: Mask of the Sun -A New Theory-

For the Super Nintendo game, see Ys IV: Mask of the Sun.

The plot of Taito’s PlayStation 2 remake of Mask of the Sun is loosely based off the Super Famicom game, although there are plenty of variations and tangents to make A New Theory a unique experience.

For instance, Adol now has to fight a boss after he is imprisoned by the Romun’s, while there no longer is anything to fight in the crater. The order of events is mostly the same, but there are plenty of differences here and there. For example, the whole episode of going back to Esteria from the first two games has been removed. Adol also first meets Eldeel on seemingly friendly terms, before he shows his true face. The game features new artwork and an animated intro showing various locations of the game along with portraits, these, unfortunately aren't as high quality as the PC-Engine ones. There’s almost nothing in the way of animated cutscenes either.

Ys IV: Mask of the Sun -A New Theory- attempts to pattern itself after Ys VI: The Ark of Napishtim, with its 3D backgrounds and 2D sprites. Unfortunately, it is not up to par. The graphics have a very low budget feel and while there are occasionally some interesting scenery, in particular some of the towns, the dungeons are long, repetitive exercises in frustration. Almost all of them are poorly designed, with almost no variation in textures and layout. Furthermore, they’re full of invisible boundaries and objects that block the characters from view, allowing enemies to get easy hits, it gets even more aggravating when it’s time to backtrack through huge stretches of these areas.

Adol walks slowly and controls rather sluggishly. He no longer needs to ram into your enemies, and instead has three different sword attacks. The magic system has changed and Adol now wields elemental swords, which can be used to summon orbs. These orbs have a variety of offensive and defensive capabilities, activated via the three attack buttons.

Like the Ys III PlayStation 2 remake, the music is rather disappointing, with average arrangements and weak instrumentation that hinders an otherwise excellent soundtrack. The soundtrack is a step up from the Super Famicom game, but nowhere near as good the PC Engine version.

No soundtrack releases exist for Ys IV: Mask of the Sun -A New Theory-, as all Ys IV music releases were published under the The Dawn of Ys title. 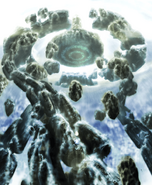 "Rising Of The Golden City" 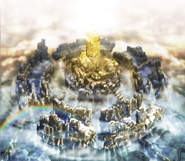 "Birds-eye View Of The Golden City" 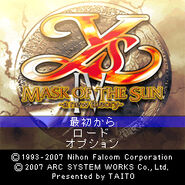