Ord's only son, Ur, nearly died from an Eresian virus, but was luckily saved by Raba. He now studies under Raba as his apprentice and lives with him in Rimorge.

Ur (ウル?) is a Rehdan who studies under Raba. Three years ago, he caught an illness brought onto the island by the Eresians. After his illness was cured by the researcher Raba, Ur became fascinated with Raba's knowledge and became his disciple. He is curious and wants to travel to Eresia someday. 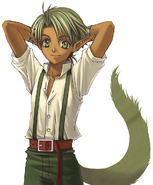