The daughter of the pirate Ladoc, this high-spirited girl met Adol in Sandoria three years ago. During a Romun attack, Adol saves her life, but, as fate would have it, gets swept away himself. (Ys VI PSP)

Terra (テラ?) is a female pirate and a member of the Ibur Gang who fell in love with Adol on his adventures in Ys V: Kefin, Lost Kingdom of Sand and Ys VI: The Ark Of Napishtim. She followed him to the Canaan Islands when they were chased by the Romun Empire. During an attack by the Romun fleet, she almost fell out of the ship, but Adol saved her. However, this action caused Adol to fall into the ocean and wash ashore on Moonset Shore while Terra and the rest of the crew were forced to dock near Sunrise Inlet. 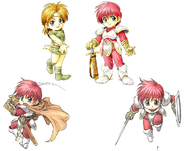