Sister Nell (シスター・ネル) is a nun dedicated to the Felghana diocese who served for years in the town's church. Now that the Bishop Nikolas has gone to the Valestein Castle, she assists newly appointed Father Pierre in his duties. While she thinks he is inexperienced, she believes that he will eventually become a great priest. She has known the two Stoddart children since they were very young. She is worried about Chester's recent disappearance and the effect it has on Elena...

Sister Nell was once saved by the Bishop Nikolas and followed him ever since. Unfortunately, when the bishop changed completely after the encounter with Galbalan at the Illburn Ruins, she ended up walking down the path of corruption alongside him out of loyalty and became the dark sorceror Dularn. At his behest, she committed many atrocities, which include summoning skeletal monsters to slaughter the people of the village at the Genos Island.

Ys: The Oath in FelghanaEdit

As the mysterious sorceror Dularn, she stalks Adol throughout the story while acting as a benevolent nun at the Redmont village. She takes notice of Adol and shows up periodically as Dularn to hinder his progress, such as summoning dangerous beasts in hopes of killing him.

Eventually, once the revival of Galbalan gets close to completion, she reveals her true identity and confronts Adol at the Genos Island for the battle to death. Adol proves to be the better. As she lays dying, she thanks him and asks him to save Elena before disappearing into light. 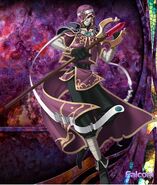 Dularn after her final defeat. The portrait changes slightly depending on the difficulty.
Add a photo to this gallery

Retrieved from "https://isu.fandom.com/wiki/Sister_Nell?oldid=9493"
Community content is available under CC-BY-SA unless otherwise noted.