Roos are one of the friendly monsters in the Ys series. They appears in almost all games in the series. Sometimes, player character can change into one of them too. When they are interacted with, their dialogue box with is populated with Roonic characters. However, there are various ways to interpret those dialogues.

Some roos can speak in human languages, for example Grand Roo in Ys: Memories of Celceta and Xavier in Ys IX: Monstrum Nox can communicate with Adol without any issue.

Their favorite food is Roda fruits.

In the past, they were revered as "Sacred beasts". They do not have horns on their heads but during the events in Ys 700 years ago, the toxic gas from the demonic essence changed them into their current monstrous forms.

Roos usually speak in Roonic language. There languages are written in Roonic characters that can be translated into English (most of the time) as shown in the image below[1] or use this Roonic Translator.

There is a magic from Gemma that allows Adol to transform into a roo.

Roos appears in six places within the Darm Tower. When the player feed them with Roda fruits, they will empowers the player with some rewards (see table below). They can be interacted with, but they cannot be understood other than Toal Fact in he demon form[2]. When they are speaking in Roonics, they can be quite rude (or maybe roode?).

To see all their dialogues exchanged with Yunica and Hugo, see their Ys Origin Dialogues.

Yunica and Hugo mentioned that Rico Gemma would understand Roonic language, it is possible he is referring to the same magic that Adol received in Ys II: Ancient Ys Vanished – The Final Chapter that turned him into Adoroo.

Roos mainly appear in Roos' nest under a Roda tree. All roos lived here has a name. A gear named "Sacred Beast Collar" can transform the party into roos and enable them to understand Roonic language.

However, in the English version, if you translated the Roonic languages on screen into English letter-by-letter, the content will even be different. These roos break the fourth wall and start mentioning the Ys series, the Trails series and even Star Trek. [3] Part of the dialogue is recorded below:

Have you played the other Ys games?
Felghana is fantastic. Really great map design and super difficult.
Origins is more linear but has three main protagonists and a really good story.
Seven is the game that introduced the engine you are playing now.
And Chronicles is the game that started it all. Bump to the beat!
Available now so play them all and buy them for all your friends!

Roos in this game[]

A roo named Xavier will assist Adol when he is in Balduq prison. 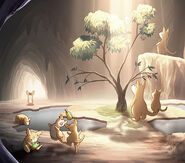