You think my ears and tail unusual? Eresians.... Outsiders are always surprised. But we find people with small ears and no tails, such as yourself, quite strange. Tee-- Hee-- That makes us even!"

The priestess of the Rehda Tribe, Olha is blessed with beautiful, fair skin. She is a master of the bow and highly respected by her people. (Ys VI PSP)

Olha (オルハ?) is the reigning priestess of the Rehda tribe that lives on Quatera Island. She expects her sister Isha to succeed her one day. She is adept with a longbow, and skilled at playing her flute.

Olha is the niece of Ord, Leader of the Rehda and current Priestess of the Rehda village. She is well liked and respected throughout her village and many look upon her for hope and guidance. Ten years before Adol Christin is washed ashore, three mighty beasts known as the Wandering Calamities attacked Rehda village, killing many, including Olha and Isha's parents. After the death of her parents, Olha was chosen as the next Priestess, as she was much older than Isha.

Ys VI: The Ark of Napishtim[]

In the beginning of the game, Olha and her younger sister Isha are on the beach, with Olha's playing her flute and Isha's listening close by. After Olha finishes her melody, Isha spots something strange on the other side of the beach. Both Olha and Isha go over to take a closer look and discover that it's a person, Adol Christin, who has washed ashore. Surprised that an "Eresian" would wash up on their island, Olha quickly hurries to Rehda village for help, asking Isha to watch over him in her absence. After Olha leaves, Isha has a vision while looking at Adol. The vision is unclear to her, but it was enough to frighten her to leave her body trembling.

Once Olha and the others bring Adol back to the village, she is then scolded by her Uncle and Chief Ord, stating many Rehdans don't trust Eresians and her helping one would only make things worse. Adol briefly regains consciousness but he is too weak to move. Adol is only able to tell them that he can understand them by nodding slowly and giving them his name before he passes out again. 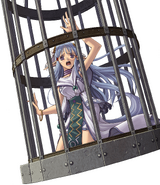 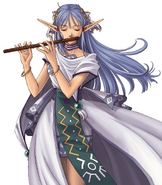