The Monstrums (, , Kaijin?) are a group of enigmatic individuals with supernatural gifts and a knack for turning up when least expected. Their mysterious abilities and strange attire have earned them both notoriety and ire from the many denizens of Balduq.

The Monstrums were established by Aprilis in order to defeat the constant waves of Lemures in the Grimwald Nox. Most of the Monstrums were originally normal civilians who were shot by Aprilis with an alchemy bullet, which turned them into Monstrums capable of changing their forms and using supernatural gifts like running up walls or gliding.

The truth is that Aprilis, along with all most of the Monstrums are homunculi created by the alchemist Zola. They were originally planned to be raised and trained by the older version of themselves, Aprilis, and Zola. But when Zola disappeared and the previous generations of Monstrums died, Aprilis found the job too difficult to do by herself. So she faked their identities as war orphans and sent them away to be adopted. Once they became old enough to join the fight in the Grimwald Nox, she seeked them out and activated their power with an alchemy bullet.

After the Grimwald Nox was gone, all the Monstrums lost their Gifts.

Three criminals who dress up as Hawk, Doll and White Cat in order to frame the real Monstrums in the theft of a valuable statue from Rijndael Antiques.

Rosvita and her partners during the Hundred Years' War.

Adol, Aprilis and the Monstrums. 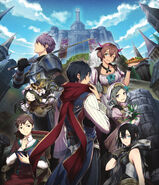 The Monstrums in their civilian forms.