Name in other languages

Laxia von Roswell (ラクシャ・フォン・ロズウェル?) is a daughter of House Roswell, a noble family of Garman, who was aboard the Lombardia. She is a playable character and part of the main cast of Ys VIII: Lacrimosa of Dana.

Laxia is a slender woman with pinkish white skin and blue eyes. She sports Garman medieval clothing, and the dress she wears in the evening feast at the Lombardia contradicts her torn up roaming outfit on the Isle of Seiren. She ties her orange hair in chic topknot with encircled braids and a blue ribbon.

In battle, Laxia wields a rapier.

Laxia is a refined and well-mannered individual who attempts to conduct herself with the dignity expected of a noble, but her stubbornness undermine her efforts. Among the diverse members of Castaway Village, who all hail from many different walks of life, she feels somewhat out of place.

The Roswell noble family was the governing body of the Garman Region. Laxia's father, Lord Roswell, was the head of the family and an archeological scholar who specialized in the study of Primordials. As a child, Laxia often visited her father's laboratory to learn about Primordials, and would accompany him on his excavations.

The year Laxia turned sixteen, her father grew so obsessed with his research that he abandoned his house and lands. In response, his people started rioting throughout the countryside. The rioting finally ceased when Laxia's brother assumed control of House Roswell, but the loyalty their house once commanded had already been lost. Soon after, the other noble houses successfully unseated Laxia's brother, which drove Laxia's mother ill. And just three months before Laxia got stranded on the Isle of Seiren, House Roswell was forced to relinquish its titles and lands.

After everything that happened, Laxia began to grow dissatisfied with all that had come to define her, and eventually lead her to resent her father. She felt like she had no place where she truly belonged, so she ran away from home.

Laxia is the first person Adol encounters on the Isle of Seiren, after which she reluctantly decides to join him in exploring the island. At first, she finds it preposterous that Adol refers to himself as an 'adventurer', something which reminds her of her father. Eventually, Laxia warms up to Adol and the rest of the castaways.

While studying abroad at the Gllia Academy, she reunited with her father. Soon after, she began extensively researching Primordials and devoting herself to restoring her noble house. Garnering wide acclaim from both the public at large and other noble houses, she became known as one of the leading experts on Primordials. At the end of the credits, Laxia and Lord Roswell stand on a well preserved fossil, presumably of a winged Primordial.

Laxia uses a rapier in battle and attacks with a swift set of piercing strikes, she also has several skills that are excellent in dealing with targets at range. As such, she excels at dispatching flying type enemies and enemies that are directly in front of her, but may find herself overwhelmed when going up against foes at multiple angles. 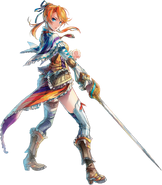 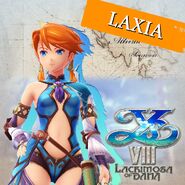 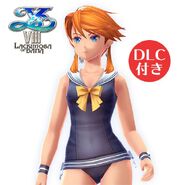