Olha's younger sister, Isha, can be a bit shy at first. She helped rescue Adol after he washed ashore. She also has the power to envision the future. (Ys VI PSP)

Isha (イーシャ) is a Rehdan who lives with her sister Olha and uncle Ord in the Rehdan Village. She is at first afraid of Adol, having experienced terrifying visions about his future, but soon warms up after he saves her from Demi-Galva, even giving him a handmade bracelet. By the time of his departure, she has come to view him as a surrogate big brother. 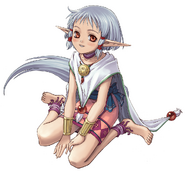