Hugo Fact (ユーゴ＝ファクト?) is one of the playable main characters of Ys Origin. He is the younger brother of Toal and son of Cain Fact, the most powerful of the Six Priests of Ys.

Raised alongside his brother Toal by Cain Fact, who taught them the value of having power, as well as striving to gain more of it at any cost.

While never on the best of terms, Hugo started truly despising his brother when the latter decided to forfeit his right of inheriting the Fact legacy's responsibilities, opting to join the Holy Knight corps instead. Hugo became the target of his father's obsession, drilling him relentlessly to become the true heir to the House of Fact.

When six months had passed since the ascension of Solomon Shrine into the heavens, rescuing the surviving people of Ys from the onslaught of demons on the surface, the twin deities of Ys, Feena and Reah, vanished mysteriously. Launching a search party to the lands below, the Six Priests gathered the best knights and mages available. Since Hugo was considered a magical prodigy, and because he volunteered, the young mage descended with the rest of the rescue team into the fiery wastes below.

Hugo is usually very calm and analytical, looking at what he might get himself into before he actually takes action. While he himself considers his manners to be considerate and intelligent, Hugo is still considered rather poor at reading other people's feelings and acting accordingly, leading to more than a few hurtful misunderstandings during the search party's journey.

Hugo acquires his skills after getting Cerulean Flabellum, Levinstrike Warhammer and Crimson Lotusblade

Hugo Fact, confronted in the Flooded Prison tier. He amply demonstrated his magical talent and mastery over the Eyes of Fact. However, his heart wavered throughout the fight, leading to his defeat.

Hugo, ensnared by demonic power. By channeling immense magic, he'd gained control over six Eyes of Fact. Though the battle was difficult, Toal was able to knock him back to his senses.

Hugo training his magic with his father 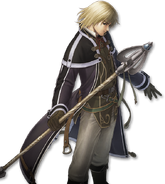 Wallpaper from Ys vs. Sora no Kiseki: Alternative Saga