Mercenary
The Clan of Darkness

A mercenary bearing a giant halberd, Geis crosses paths with Adol several times throughout his mission. He lives by the motto: "Don't stick your nose into other people's business." (Ys VI PSP)

Geis (ガッシュ?) is a mercenary and recurring character in Ys series that first appeared in Ys VI: The Ark of Napishtim alongside his brother Ernst. He later returns in Ys Seven to serve as one of Adol Christin's allies and acts as his rival.

He wields a jet-black poleaxe with frightening skill, manipulates talismans for sorcery and commands alchemically-created fairies inherited from his brother Ernst. He is endlessly critical of Adol and the two of them are often at odds with one another, but ultimately respects his ability and strengths, and reluctantly counts him among his allies.

Before the events of Ys VI: The Ark of Napishtim, it is revealed in Ys: Memories of Celceta that Geis is originally from the village of Danan where many members of the Clan of Darkness reside. When Ernst and Gruda left the village in search of power, Geis pursued them in hopes of stopping them before they follow their ancestors' course of action and cause major damage to the world.

According to Ys Seven, Geis went to the Kingdom of Altago to look for seal arts so he can defeat Ernst. Geis came across Ciarius who taught Geis the seal arts he desired. However, the deal required Geis to return the favor someday when he goes back to Altago.

Ys VI: The Ark of Napishtim[]

He encounters Adol when the latter is exploring the Mythos Path. He then challenges Adol to a duel to test their skills, and Adol agrees. After the duel, he tells Adol to not interfere with local affairs. Later, he places talismans on some pillars in the Zemeth Sanctum and tells Adol not to remove them. Later, Adol walks in on an argument between Geis and Ord. When the Great Vortex is temporarily dissipated, Geis discovers that the talismans were removed and blames Adol for removing them, only to have Raba explain to him that the culprits responsible for removing the talismans are Baslam and his workers. After Adol defeated Lanaluna, Agares and his troops cornered Adol and Olha who Agares held hostage intending to enslave. Geis kills them and rescues Adol and Olha from this situation. Geis later shows up in the Ruined City of Kishgal, and is cleared along with Adol to go into the Ark of Napishtim. They split. Geis then fought Ernst and lost while Adol defeated Galba-Roa, the original Galbalan. Adol then found Geis, and Geis asked Adol to defeat his brother. Adol and Geis escape the Ark of Napishtim after Adol was forced to destroy it. Geis also inherits Ernst's three fairies. 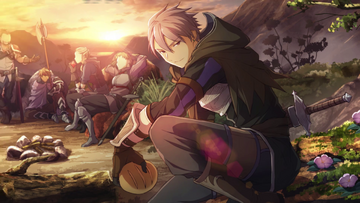 He cameoed in the ending cutscene behind Hawk holding his signature halberd. [2] 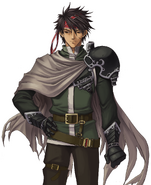 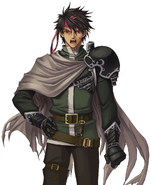 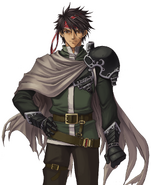 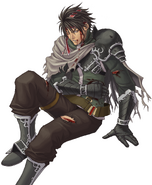