Galbalan is an ancient demon and the main antagonist of Ys III: Wanderers from Ys, and its remake, Ys: The Oath in Felghana. Recovering the four statues that house its powers is the key element of the plot of the game.

Galbalan is an ancient demon from the legend that terrorized the land of Felghana long time ago. Supposedly, it was slain by the warrior Genos with the blessing of the Winged Ones. However, it turns out that even Genos could not defeat the beast completely so he divided its powers into the four statues and sealed each statue at different regions across Felghana.

It is implied that Galbalan is an artificial creation from Ash Emelas that was created by the Clan of Darkness long ago as a weapon of mass destruction. It somehow gained sentience and turned against its creators, going on a rampage before getting sealed in Felghana by Genos.

Ys: the Oath in FelghanaEdit

Some time before the events of the game, it managed to get in contact with Bishop Nikolas at Illburns Ruins, turning the once devout priest into the fanatical madman who would stop at nothing to revive his true god. Through Nikolas, Galbalan was able to destroy most of the descendants of Genos and regain his powers. After receiving Elena's energy, Galbalan starts to awaken and declares his intention to destroy everything and spread terror across the world. Fortunately, Adol manages to arrive just in time to face the would-be destroyer. Although Adol is successful in critically weakening the monster, it starts to regenerate rapidly. Ultimately, Chester, in his moment of redemption, sacrifices himself to blow up the whole island, destroying the demon for good in the process. 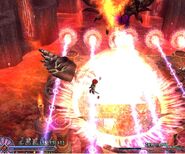 Galbalan in its second phase.

Galbalan in its final phase.
Add a photo to this gallery

Retrieved from "https://isu.fandom.com/wiki/Galbalan?oldid=9420"
Community content is available under CC-BY-SA unless otherwise noted.