Dana Iclucia (ダーナ・イクルシア?) is the main female protagonist in Ys VIII: Lacrimosa of Dana, and is first introduced as the mysterious blue-haired girl who appears in Adol’s dreams.

Dana is a young woman with blue hair and aqua eyes. She wears the midriff baring traditional Eternian outfit, bridal gauntlets, detached sleeves, faulds, and knee high sandals. She ties her long hair in twin tails, decorated with white ribbons and a hairband. Dana uses her Crescent Moon Blades while rotating her body to pull off speedy attacks one after an other.

In Luminous style, Dana has orange hair and aqua eyes. She dual wields a pair of katar.

Despite her elegant appearance, she has a wild imagination and behaves impulsively and recklessly, much to the dismay of her peers. If Dana thinks someone or something is in trouble, she'll risk life and limb to save it.

Dana comes from the Eternian era, an extinct civilization who had previously lived on the Isle of Seiren. She is considered to be pretty small comparatively to her species despite of her blood as an Eternian. She succeeded the post of Maiden of the Great Tree, a position of the highest order of Eternia's Religion, and serves the Great Tree of Origins.

She became one the Wardens of Evolution after defeating the Ancient Beast of Mist. However, she later sealed herself at the base of the Great Tree in order to avoid that role, to reawaken in Adol's era, and to stop the Lacrimosa.

In the Epilogue, it was said that Dana's existence was erased from the memories of the Castaways except Adol who wanted to find her. However, in the True Ending, her memories with everyone were recovered thanks to the Earth Goddess Maia. She soon takes over the Great Tree of Beginning and the Providence of Evolution's (Theos de Endrogram) task and becomes the new Goddess of Evolution; together with the four Wardens of Evolution as her cohorts.

She makes a brief appearance in a sidequest after collecting Azure Petals.

Dana's childhood friend. She’s a hard worker that is tough on herself and those around her. While she does often make cautious remarks towards Dana who always finds ways to get in trouble, she has acknowledged Dana’s rich imagination and decisiveness since they were kids. Olga may have a different way of thinking and living compared to Dana, but has always protected her friend since they were children and continued doing so even as they grew older.

After Dana's succession as the Maiden, she served as the Chief Priestess despite her option to return home. She's one of the few Eternians to know about Dana's ability to communicate to Adol's era, and helped her to reveal the reason of their civilization's extinction. She suffered her death a year after Dana escorted some of the Eternians to the southern countries.

Dana’s childhood friend and co-candidate for the Maiden's Post. Sarai has a gentle and cheerful personality, and treats everyone equally. She loved listening to rumors as a kid, and would watch over Dana the troublemaker who caused trouble to those around her, and Olga who would scold her for it, when they were young.

Later in the story, it was revealed that the real Sarai had died when she was younger, and that the Sarai that Dana knew was a projection created by Ura, a Warden of Evolution who had the power to shape-shift and imitate others.

Dana appeared in Adol's dreams in which he experiences her life as if it were his own. He is the next Warden chosen by Dana however everything turned upside down when the two rebelled on their roles and became the natural distortion of the metempsychosis or Lacrimosa. Dana knew him even before Adol's arrival and was inspired by his adventures. He was the reason of her determination to stop the next Lacrimosa.

She promised Adol she'd tell her premonition before their fight with Oceanus which she fulfilled at the true epilogue and embraced him as a sign of thanks and gratefulness. Depending on the choice, Dana responds that she's really glad she met Adol or She'll never forget him and had a very sentimental farewell with her promise.

Dana is an all-rounder who boasts incredible speed and attack range. She wields various Essence skills and can fight any opponent.

During Dana's era, she can switch into Gratika style and Luminous style, which are similar in concept to the Three Weapons system in previous Ys games. Dana's skills will change depending on the style she is currently using, they also let her solve puzzles in the Sanctuary Crypt:

Dana's musical theme is called "Dana", continuing the Ys tradition of having a musical track named after the respective game's heroine. Several tracks in Ys VIII contain a motif of Dana's theme, including "The Sibylline Road", "Theos-De-Endrogram", "Volitional Decision", "Garden of Celen", "Yesterday in Etania", and more.

In the Ys VIII Super Ultimate album, "Dana" received an arrangement by Yukihiro Jindo. A cover of "Yesterday in Etania" with lyrics and the alternate title, "Beyond the Flowing Night", was sung by Yuuri Suehiro. 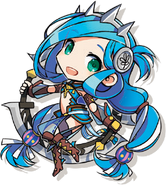 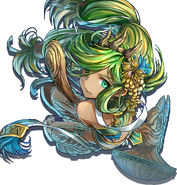 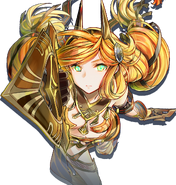 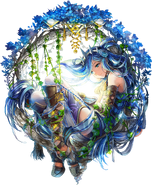 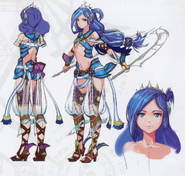