Ys Origin
The black-robed leader of the Darklings. His considerable power enables him to cast petrification spells at will. His smile is cold and his demeanor is even colder.

Dalles (ダレス?) is a dark mage from the Clan of Darkness. He is one of the main antagonists of Ys II: Ancient Ys Vanished – The Final Chapter and the prequel Ys Origin.

Dalles, transformed into the ultimate demon after taking control of the demonic essence. Possesses immense magic power and will annihilate all who can oppose him -- but can never truly be satisfied, always thirsting for more.

The puppetmaster with the Cleria Cloak who commands the demons. Born of pure demon, making him invulnerable to magic. Only Darm is stronger -- and Darm is the only man Dalles answers to.

In Ys II, he acts as an enforcer to Darm, leading the army of monsters in the floating island of Ys and killing off the Six Priests' descendants. He appears many times throughout the game to hinder Adol's progress such as turning the escaped human prisoners into stone statues and personally leading the execution of Maria, one of the descendants of the six priests. He confronts Adol at the underpass of the shrine of Solomon but is defeated.

In Toal's route, it turns out that he is nothing more than a pawn to the real mastermind, Cain Fact. After Toal defeats him, Dalles attempts to destroy the black pearl but is thwarted and killed off by Cain Fact who reveals his true colors in the process. Before Dalles dies, Cain Fact promises him that Dalles will be revived as a loyal servant once Cain Fact gains complete control of the black pearl, which is precisely what happens 700 years later in Ys II.

Dalles in Ys I and II Chronicles.

Dalles in his boss form in Ys I and II Chronicles. 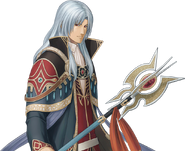 Dalles after he uses the demonic essence to transform into the ultimate demon in Ys Origin.