The bishop
Follower of Galbalan

Head of the Felghana diocese. Once served at Redmont's church, but now focuses his efforts on trying to keep relations between the count and the townsfolk as smooth as possible.

Bishop Nikolas Garland (ニコラス・ガーランド司教) is the head of the Felghana diocese. Once served at Redmont's church, but he now focuses his efforts on trying to keep relations between the count and the townsfolk as smooth as possible.

In reality, he is the mastermind behind Chester's revenge and Count McGuire's more vicious actions. After making contact with Galbalan at the Illburns Ruins some point before the game, once-devout priest turned into a fanatical madman who would do everything in his power to bring his god Galbalan's revival to completion. To this end, he destroyed the village at the Genos Island in hopes of wiping out the descendants of Genos and had Count McGuire construct the clock tower so that the powers of the four statues can easily be transferred over to Galbalan once they are placed at the key points in the tower.

Ys: The Oath in FelghanaEdit

He appears in the game after Adol rescues the miners who were trapped at Tigray Quarry. He is initially favorable to Adol, helping Adol in his search for the four statues and working with Mayor Edgar to uncover the true motives of Count McGuire's late actions.

However, once Adol and Elena manage to dissuade Chester from killing Count McGuire, Bishop Nikolas appears before them and reveals his true colors as the follower of Galbalan. After revealing his intention to revive the ancient demon, he kidnaps Elena in order to use her as a final sacrifice to Galbalan. The dark bishop is ultimately defeated by Adol, who proceeded to destroy his "god" Galbalan as well. 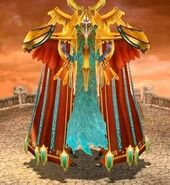 The form that Garland takes for the boss battle against him.

Garlan's appearance as a zombie during the final battle against Galbalan. This is a nod to the boss fight against zombie Garland in original Ys III.
Add a photo to this gallery

Retrieved from "https://isu.fandom.com/wiki/Bishop_Nikolas?oldid=9383"
Community content is available under CC-BY-SA unless otherwise noted.