A beloved antique doll who can both walk on her own and use a Gift. Her origins remain a mystery even to the Monstrums.

Anemona Rijndael or Doll (人形?) is a playable character in Ys IX: Monstrum Nox. She is a beautiful, doll-like Monstrum created by a leading craftsman. She has the ability to see invisible objects that other cannot see.

For some reason, she wants to get in touch with the adventurer Adol Christin.

Anemona's origin is a complete mystery. She moves around in battle with unique movements seems impossible for a human to achieve. She is the most mysterious among the Monstrums in Balduq. She herself does not have any memory of how she has come to gain sentience. She only knows that there is something she wishes to find desperately but has no idea what it actually is.

Her identity is shown in Chapter 4 where she enlists Adol and other monstrums' help in taking back the stolen saint statue from fake monstrums. She is an antique doll in Antique Shope Rijndael treasured by the couple who runs the shop. After successfully retrieving the statue, she joins Adol and his party as she feels Adol's attempts to solve the mysteries of Grimwald Nox can help her discover something about her own past.

In Chapter 8, Anemona's original owner turns out to be none other than the saint Rosvita. Anemona first awakened when Rosvita joined the army to fight in the Hundred Year War. After the war, she was taken by Zola for his Alchemy experiments. She was given a human sized body and a soul. Then her memories with Rosvita were used to transmute a clone Rosvita's soul and into an empty homunculus to be revived as Aprilis.

Later in the game, it is revealed that all other Monstrums are homunculus created by Zola to fight the Grimwald Nox with Aprilis. They were originally planned to be raised and trained by Aprilis and Zola. But when Zola disappeared, Aprilis found the job too difficult to be done by herself. So she faked their identities and pretended they were war orphans to be adopted. When they became old enough to join the fight in Grimwald Nox, she sought them out and activated their power by shooting an alchemy bullet at them and turning them into Monstrums. Anemona is an exception, as she is not based on any human partners who fought along with Rosvita.

In the ending, she is given a real human body, presumably a homunculus shell, and is seen living with the owners of the antique shop. 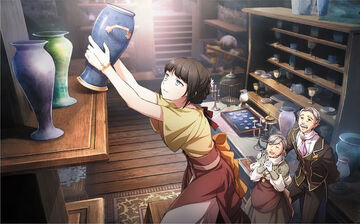 Anemona with her real human body at the end of Ys IX
Community content is available under CC-BY-SA unless otherwise noted.