The smug admiral of the Romun Fleet, this aristocrat dreams of someday securing a seat in the Romun senate. Yet what he plans to do in that position of power, nobody quite knows... (Ys VI PSP)

The noble commander in charge of the Romun naval fleet. Admiral Agares (アガレス提督?) has dreams of admittance into the senate, and is willing to do whatever it takes to achieve that goal. His second-in-command, Ernst, has convinced him that the Vortex of Canaan holds the glory he seeks, and he's so convinced that this is true, he's committed virtually the entire might of the empire to the task of finding a way in. 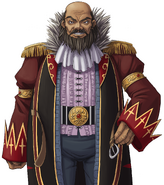